Throughout Star Wars history, we can see the evolution of lightsabers in a nice perspective. The very first lightsabers, developed nearly 7000 BBY, when metal swords were still cool, weren’t very practical, as they required a power-source with a cable strapped to one’s belt. However, when a new technology allowed lightsabers to be powered up by a crystal unit implemented directly in the saber, they became extremely deadly weapons. As part of the Jedi training, each apprentice had to build his or her own lightsaber, after they mastered their training sabers. Throughout the history, various lightsaber combat forms were developed, and I will try to explain the strengths and weaknesses of each of them.

Note: I have included notable users of each form also from The Legends, as The Canon is still quite poor on the topic.

Note2: The images are not mine, they are from: http://starwars.wikia.com/wiki/Lightsaber_combat/Legends and originally published in the book The Jedi Path. 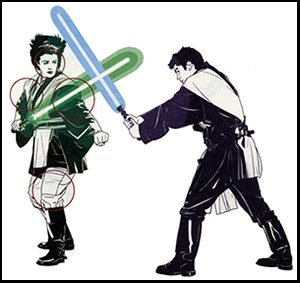 Shii-Cho, The Way of the Sarlacc, or also known as The Determination Form, is the 1st of the seven lightsaber combat forms. The form was developed right after the transition from the traditional metal swords to lightsabers. The form was open and wild, I would say, relying on one’s specific tactics to disarm the opponent, rather than injuring or killing him. As it was developed prior to the rise of the Dark Lords of the Sith, it wasn’t suited for lightsaber-to-lightsaber combat and was soon replaced by the 2nd form. However, it is still the form all Jedi initiates start with. 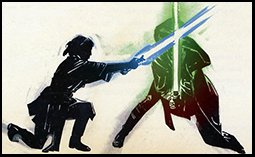 The Way of the Ysalamiri, also known as The Contention Form, is the 2nd of the seven forms. Specially developed for lightsaber-to-lightsaber combat with the focus on precise sweeping moves and strikes. Users of this form could defend themselves without ending up drenched in sweat, while preventing being disarmed. Elegant and effective, the 2nd Form is popular among users who preferred lightsaber combat over any other combat technique.

Soresu, The Way of the Mynock, also known as The Resilience Form, is the most defensive of the seven forms and was mostly used prior to The Clone Wars to counter the wide-spread use of blaster weapons. While Masters of Soresu could easily defend themselves and others around them, it’s lack of aggression could often lead the user to hesitation when opportunity to strike presented itself. With the focus on pure defense, the 3rd Form later became the anti-aggression symbol of the Jedi. 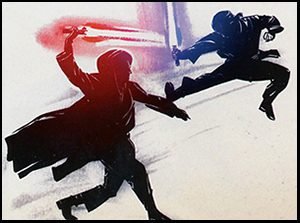 The Way of the Hawk-Bat, or The Aggression Form, is the 4th of the seven traditional lightsaber forms. One of the older forms, Ataru is primarily used by users who preferred aggressive acrobatic attacks and maneuvers with the focus on injuring or killing their opponents.

The 5th of the seven forms, The Way of the Krayt Dragon, also known as The Perseverance Form, originally developed from the 3rd lightsaber form, Soresu, and is usually sub-split into two lesser variants, a more defensive Shien and the aggressive Djem So. The form was specially designed to redirect opponents’ attack back to them, either via blaster bolt deflection (Shien) or by using opponent’s lightsaber strikes against him (Djem So).

The Shien variant basic posture is a balanced position with a two-handed grip of the lightsaber above user’s head – a posture we’ve seen in a few movies and in a lot of Star Wars computer games. While known to be an aggressive form in general, it was practiced by great many Jedi. 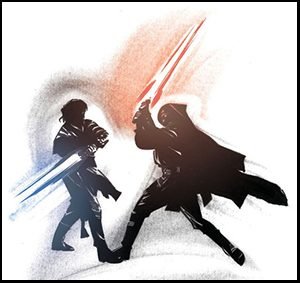 Niman, The Way of the Rancor, or The Moderation Form, is the 6th form of the great seven. The most balanced form, taking techniques and sequences from all the other forms, is mostly used by the Jedi who preferred a life of balance. Combining simpler defensive and offensive techniques, the form allowed users to calmly, yet effectively disarm opponents while focusing their force abilities as well. The sixth form can be extremely deadly in the hands of a user whose preference lies in balancing lightsaber skills and force abilities. This was very effectively demonstrated by Exar Kun, one of the greatest lightsaber duelist. 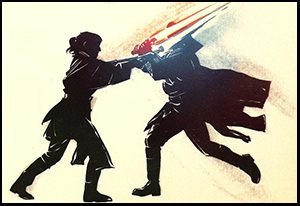 The Way of the Vornskr, or The Ferocity Form and also later known as Vaapad, is the 7th lightsaber combat form. Known to be the most aggressive and vicious of the forms, it required great mental discipline as it channeled the internal energy of the user. The form was soon banned by the Jedi order as it often led users to the Dark Side. Only the most experienced Jedi Masters were able to truly master the form. The 7th Form was recreated by Master Windu during the last days of the Old republic and became known as Vaapad.

While all the Forms were originally developed by the Jedi, they were quickly adopted by the Sith as well. Naturally, the Sith preferred more aggressive forms, where they can utilize their emotions and unleash anger and hatred on their opponents. But, of course, there were Sith Lords among them who preferred patience and more defensive styles simply to wear the opponent down.

A great example is Darth Zannah from the Bane trilogy. Since she was slightly built with less than average height, the use of Djem So would not be very useful to her, but with her double-bladed lightsaber, the mastery of Soresu made her nearly invincible. 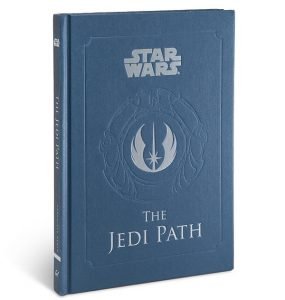 I, personally, am very attracted to Ataru and Makashi, but who knows which form would eventually suited me the best.

If you would like to know more about the lightsaber forms and the Jedi in general, I would recommend checking out The Jedi Path book by Daniel Wallace.